I've neglected my blog this past year as my focus was primarily on my nuptials. However there were a few happenings of note:

In June, a clip from the film 'Attack of the Slime People' was used in a skit on The Tonight Show with Jay Leno. Although I did not appear in the clip used, it got the buzz going and hopefully the film will be completed soon!

In September, I flew to Pocatello, Idaho to film on location for the independent film 'Doris' Mouse Earrings'. Yes this was a film that was revisted. It was re-written, re-cast, and re-shot.. and incidently made FRONT PAGE NEWS in the small town. Click here to read the article. 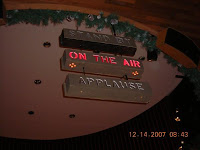 In December, the theater bug got me again and I performed in a live radio play of 'Its A Wonderful Life'. Radio drama was a new medium for me and we had a blast!! The production turned out great and the audiences were both abundant and fabulous!!! 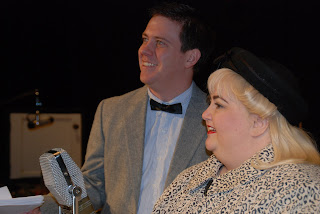 Here's to hoping the writers strike gets resolved and they receive what is due to them.. and that 2008 is a plentiful and prospherous year!!
Posted by Jackie at 8:40 AM