October and November I did a little bit of extra work again and succeeded in finally getting my third SAG voucher!! woohoo! Now just waiting for the Screen Actors Guild to acknowlege it. That final voucher happened on the set of the feature film "Burning Palms"... Tho look for me in an upcoming episode of Kath & Kim as well. 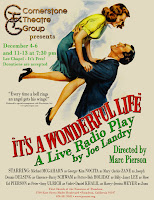 December has been a busy month. I was cast in a USC student film short called 'Sourpuss' and recently wrapped filming.

I was also honored to be asked back to revisit the role of head angel in "It's A Wonderful Life - A Live Radio Play" again this year. The first week of performances have gone well.. one more week to go!!