Rave Reviews are pouring in, for "Attack of the Slime People!" 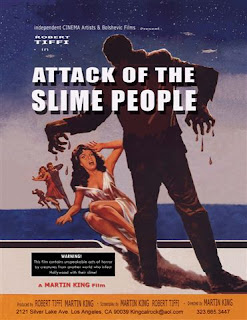 Courtesy of http://www.bmovieman.com/
Reviewed by Nic Brown
"Of course a film cannot usually stand well on the performance of one actor, no matter how good a job they do. Fortunately ATTACK OF THE SLIME PEOPLE doesn’t have to depend solely on Robert Tiffi’s fantastic performance. The entire cast did a terrific job, mostly playing “straight men” to Flavinoid’s maniacal filmmaker. In addition to the quality of acting found in ATTACK OF THE SLIME PEOPLE, the film also had high production values across the board. A collection of classic cars, good costumes and creative camera work were used to create an effective illusion of 1950’s Hollywood to the point that it would be easy to forget when the movie was made. ATTACK OF THE SLIME PEOPLE isn’t the cult sci-fi/horror film that you might expect from the title. However, with its quirky but fun plot, over the top performances and its nostalgic nods to the Hollywood of yesteryear, the movie will definitely become a cult classic in its own unique category. So if you have the opportunity to check out director Martin King's ATTACK OF THE SLIME PEOPLE I highly recommend that you do."
Read the full review here.
Posted by Jackie at 4:30 PM