"Attack of the Slime People" gets another great review! 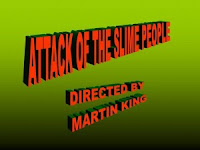 This one is courtesy of http://www.independentfilmreviews.com/
(We even got a better rating than "Forgetting Sarah Marshall," "Sicko," and "Michael Clayton!")

"Attack of the Slime People is a spoof of Hollywood B Horror movies of the 1950’s. What makes this film so hilarious is its protagonist, Buddy Flavinoid, who’s roving eyebrows, wild eyes and murderous rage are unmistakably unique. He reminds me a of Ren from Ren and Stimpy, with his stress and paranoia spilling over into all sorts of physical comedy. The film is also interesting in that it’s a film about a film that never gets made (in an odd way, this would make it akin to cult classic American Movie)......For a low budget movie, this is a fully-realized work of art, with great writing, directing, acting, look and style. It’s at once timeless and modern. All I can say is: find and see this one-of-a-kind comedy that both satirizes a genre and turns it completely on its head! A future cult classic in the making!" 9 out of 10
Read the full review here.
Posted by Jackie at 4:34 PM